Even on the border of the most frequented paths are many things travellers have passed by unheeded or unexamined. (from Natural History of Deeside and Braemar)

I find William MacGillivray’s grave by accident in New Calton graveyard. Exploring.  It is a little out of place. A lump of red granite with faded gold lettering, an orra lump, amongst the grey neo-classicism of the Victorian Northern Athenic elite. It is illegible.

As he often was.

And of course redolent of Aberdeen, where he was born, and ultimately lived and died. And where the previous summer I had noticed a plaque marking his home there.  I recognised his name from his dominating presence in Raptor, by James McDonald Lockhart. He says he had also discovered him by accident, but hangs his book around MacGillivray’s sophomore journey from Aberdeen , via Fort William and Carlisle , to the ornithological collection of the British Museum. On foot. 800 miles or more of continuous, self absorbed quest.

I can see why . There is something Dostoyevskian about this lumbering intent figure. During much of the journey  he shuns company , and is refused lodgings due to his appearance. Over one agonising period after he crosses the Border , he is without food and shelter, as he repeatedly has the English banknote he has collected in Carlisle refused,  allegedly due to fear of forgery.

Rise with or before the sun

Give at least half a dozen putts to a heavy stone

Read the Chapter on Anatomy in the Encyclopaedia Brittanica

Read the Book of Job

Abstain from cursing and swearing

Above all procrastination is to be shunned

(from Journey to London, edited by R. Ralph)

I wonder about MacGillivray’s wilful eccentricity – is it mere stubbornness. He lives by a set of strict imperatives,and battles a Biblical sense of shame.

This man grew up on Harris, and maybe that explains a lot. He was raised by a grandparent , having been effectively abandoned by his father in Aberdeen, following the death of his mother. He went back to University there aged twelve, walking back and forward to the Long Island for the holiday period each year. Science, linking him to his God, was a given and a kind of extended worship. A calling.

MacGillivray was a success . He was a professor, with a large family, who introduced the idea of fieldwork to university curricula, had bird North American bird species named after him by James Audubon in gratitude for his assistance with his work and was credited as the discoverer of the hooded crow..

MacGillivray was a failure. His exquisite illustrations to his enormous and exhaustive history of British Birds were too expensive for him to afford to include, and his star fell behind other popularisers of Victorian natural history. He was not able to gain academic credit in Edinburgh, and periodically shucked off his responsibilities to go wandering back into the hills.

MacGillivray’s grave was originally illustrated by the engraving of a golden eagle – one of the most famous of his illustrations, which were collected in the Natural History Museum after his death. The metal plate has now been stolen – presumably for its value as scrap- leaving only a vague impression in the limey foundation behind it, looking something like an eviscerated pigeon.

We make stories though. McGillvray made a few of his own. In his massive bird books , he decided to insert diversions, mock dialogues and such to break up the (fairly unrelenting) flow of anatomical and habitat details of the species. He and Audubon wander through the Pentlands, puffing up each others reputations, and blasting the hell out of anything unfamiliar with feathers..

( species heading from A History of British Birds, Indigenous and Migratory)

I am more interested whether in his journals he had a posterity in mind. Two survive ,  a Hebridean one, has  him as rather cool young doctor, waiting to find his direction, while he dallies with an number of young women, and knocks off the fauna of the Hebrides, and stuffs a bear. A few, perhaps chastening years later, he manically walks to London.

And of course he has been reinterpreted, as great. or lost , or a bit Aspy. My own wonder was if he could be  reclaimed as a founder of psychogeography. He has a particular eye sometimes . For instance in this quote

A river is nothing but a continuous series of continually renewed drops of water following each other in a groove. (from Natural History of Deeside and Braemar)

It has I think a crystal clarity ( see what I did there!) -seeing beyond the obvious to what is really there. MacGillivray would not have liked to think that rambling was his purpose, although I think it was his therapy. There is a transcendent effort to his attempts to describe his birds that I recognise. See them- see what I see, see me.

A flight of sandpipers is a beautiful sight; there they wheel around the distant point, and advance over the margin of the water; swiftly and silently they glide along now, all inclining their bodies to one side, present to view their undersurface, glistening in the sunshine; again, bending to the other side; they have changed their colour to dusky grey; a shot is fired, and they plung with an abrupt turn, curve aside, ascend with a gliding flight, and all, uttering shrill cries, fly over the stream to settle on the shore that settles out towards Barnbogle ruins. (from A History of British Birds, Indigenous and Migratory)

We might see MacGillivray as an outsider . Hurrying away from society. Split into pieces by his journeys and the different things he was at the ends of them – orphan, Calvinist, Gael, lad of Pairts, proto-scientist, Establishment figure, family man.  Occasionally needing to run to the hills with his demons (failings).

But we can also see him as making the journeys of many lower middle class Scotsmen, on foot towards improving prospects and methods of transportation, with a discomfort about the pace of change and a nostalgia for the space in which they lived, and their animal companion. And perhaps authoring himself, in a way which now invites our post-modern counter-readings.

What do we know though?

I found some of MacGillivray’s illustrations on the NHM website. The reminded me of a story about Richard Richardson a later ornithological  artist, attempting to ‘penetrate beyond the inscrutable eye’ of the nesting black-tailed godwit. Richardson’s legend is that he could somehow ‘think bird’. which means really he could predict what it might be about to do next (so they believed)*.

MacGillivray might also have aspired to this, yet most of his illustrations give back a blank stare. He lived in a world before binocs, so perhaps there is a prosaic explanation, but I like the metaphor. MacGillivray gives us back his own blank stare. We don’t know his essence , he merely reflects the light.

Or is it a reflection – if we were close enough and looking from the right direction it would be. What might we want from this character?  There is a fashion for the unsociable outcast, the oddball , the fool on the hill, which it would be easy to fit him into. But looked at closely almost any self made Victorian scientist would look gauche and autistic. I have biographies of Smith and Gould and said Hugh Miller,which talk to their uncomfortable translation from humble, determined (nay obsessive) repetition (and origin) to the sacred methods of science. Usually the transformations of activity were easier that the crossing of the class divide and the coupling of faith and truth. MacGillivray seems both intractable and prolific. His exhortations to himself are the apogee of self-discipline (or self-punishment , as we might see it now) . But it  worked – he was either a genius or a driven man. Probably both.

MacGillivray appears to have been of an irritable , highly sensitised temperament, fired with enthusiasm and ambition, yet contending, for some time at least, with poverty; ill health and a perhaps not well-founded , though not the less acutely felt, sense of neglect.. thus ceaselessly moved to accomplish yet as continually haunted by the dread of failure… This author was undoubtedly unwise in his frankness, but dipomacy is a stranger to such characters. He never hesitated to differ sharply with anyone, or to express his own views pointedly – if he scarcely disguised his contempt for triflers, blockheads, pedants, compilers and theorizers he was nevertheless a lover of nature , an original thinker, a hard student , and finally an ornithologist of large practical experience, who wrote down what he knew or believed to be true with great regard for accuracy if statement and in a very agreeable manner ( Elliot Coues)

I spent an afternoon with his pictures, or the reproductions of them in Robert Ralph‘s popularisation.  He is not an artist to omit detail , and so things are not naturalistic. He paints one of the great auks (from a skin he was given) dwarfing a rock shelf ( with a limpet for scale), but about to be breached under a wave of shaving foam type fluff , which runs unconvincingly off towards what looks like Toe Head on the west coast of Harris ( where McG grew up). Another outsize and awkward great auk bobs in the distance. (I thought we’ll never know how it moved..)

For painting I have a natural genius and in as far as I have tried this art I have succeeded well. Flower drawing however is the only branch of it in which I have made considerable progress

He is good at plants , and careful to set his specimens in naturalistic scenes – birds breach from a sycamore supporting two cushats, lichens smother the rocks below a slightly off balance looking ptarmigan. It looks like its modelling.

Some birds I think he has studied in life – wrens, linnets, pigeons- feel that ,despite the anatomical verisimilitude, they have been seen. They look like they are about to move (albeit often from unlikely starting points).

Unfortunately the golden eagle picked for his memorial would only move if it had a battery. it sits weightless on an unconcerned rabbit, string vacuously into the middle distance. 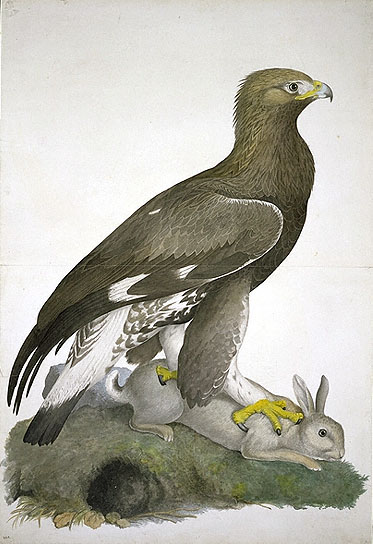 MacGillivray became a voracious cataloguer  – fish, molluscs, shells, cattle (but for some reason, perhaps a financial one, not plants). One of the linnets which were about to take off in the last paragraph hangs limply from the mouth of an ermine – the stoatie s eye glints with excitement.

Ralph’s selection of plates ends with a horseshoe bat. One bat hangs unobtrusively on a by now familiar, foraminiferous rock outcrop. Another soars off into the space of the white page, tiny toenails expanded – as near weightless as  can be.

Its a good place to end.

Mr Mcleod accompanied us as far as the mouth of the rivulet, on which we fished yesterday.At parting he gave us a true highland clasp, which spoke to my sentient faculty of a heart warm with tenderness. Excepting the grasp of Jessy Simpson, last year, I never felt a more endearing one. As to his character I dare not meddle with it… Fare-thee-well, my dear friend. May the blast of Misfortune fall lightly on thy frame ! (from Hebridean Journal)

* this is from here